Contest winners are as follows: 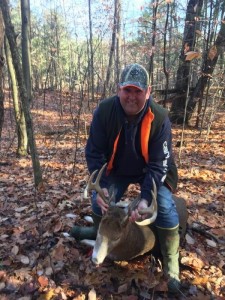 Heaviest Buck; Most Points and Largest Outside Spread were all won by Dave Allen of Mayfield with his 159-pound, 8-point buck that he weighed in on Saturday, 11/19.  Closest to 125 pounds without going over (buck or doe) was won by Ben Russo of Johnstown with his 122 pound buck, also weighed in on Saturday, 11/19. Heaviest Doe was won by Nate Craig of Fonda at 103 pounds.  Four guns were raffled and won by Dave Allen; Mark Kruger of Ft. Johnson; James Hoagboon of Gloversville; and Bob Hayes of Johnstown.  Eric Wiedermann of Johnstown won the $250 gift card to Runnings.

There were a total of 65 registered hunters. Each registrant won a hunting-related table prize and was treated to a lunch at Loopie’s Pub on each day of the contest, as well as a wild-game dinner on Sunday at Loopie’s Pub.

For more information on the contest contact Terry Swierzowski at the Fulton Montgomery Regional Chamber of Commerce at (518) 725-0641 or via email at terrys@fultonmontgomeryny.org.