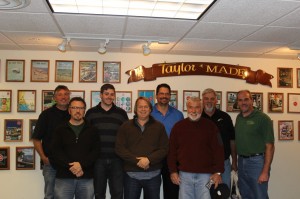 The Fulton County Tourism Department announces the Fishing University schedule for the episodes filmed on the Great Sacandaga Lake and Canada Lake. The Outdoor Channel show, hosted by fishing legends Charlie Ingram and Ray Brazier, is in its 28th year making it the second longest running outdoor show of any type anywhere. The Fishing University crew was in Fulton County to film during September 2014.

While in Fulton County, Ingram and Brazier toured Taylor Made’s factory on Harrison Street, Gloversville and attended a “Meet & Greet” that was held at Lanzi’s on the Lake, Mayfield. Filming included two high school segments at Mayfield High School and Hamilton-Fulton-Montgomery Board of Cooperative Educational Services (HFM BOCES) which will be featured in each episode.

Each episode will air six times throughout the 2015 season. The first quarter airings are as follows. Please check local providers for the Outdoor Channel listings:

Filming was made possible by the continued support of the Fulton County Board of Supervisors, Frank’s Gun and Tackle Shop, Taylor Made Products, Allwater Guide Service, Rob Javarone, and many others. For more information, please contact Gina DaBiere-Gibbs, Director of Tourism, at (518)725-0641. Photos from the filming can be found on the Visit Fulton County, NY Facebook page.