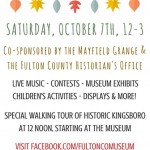 I LOVE NY began the “New York Fall Foliage Report” on September 14 and will continue until the end of the foliage season, around the first or second week in November.  Fulton County has its own “foliage spotters” to participate in this annual report. Reporting station: Lapland Lake Nordic Vacation Center, Northville Percent of trees […] 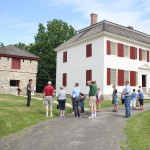 The Fulton County Baseball & Sports Hall of Fame will be holding its 2013 Inductions on Saturday October 12, 2013 at Parkhurst Field in Gloversville NY between innings of a Vintage Baseball Game. The game will be played that day between the Whatley Pioneers of Western Massachusetts and the local A., J. & G Team, […]

Path Through History Weekends begin this weekend June 1 and 2 and will highlight special programming and the importance of heritage tourism to New York State.  Fulton County has many historical and heritage attractions to visit throughout the year.  The special events taking place in Fulton County this weekend are: Anniversary Lecture Series: “In the […]

Performing arts and visual arts are vital in Fulton County; community theater and civic bands are a presence in both Johnstown and Gloversville. There are a number of art galleries in the county, including the Perrella Gallery at Fulton-Montgomery Community College in Johnstown, the Art Gallery housed at the Fulton Montgomery Regional Chamber of Commerce […]